The Artistic Marks in Freestyle Performances
by Katrina Wüst, 2019

* Consistency of rhythm in all 3 paces
* Freedom and lightness of paces, elasticity of steps / strides
* Impulsion
&nbspa) Engagement of hindlegs
&nbspb) Supple, swinging back
Loss of rhythm in at least one pace as well as a lack of impulsion diminish this mark.

HARMONY between RIDER and HORSE

1. Structure:
* Choreography should take examples from the composition of other forms of art (film, theatre)
* Entering the arena -> rousing attention of spectators (and judges)
* Interesting beginning -> positive signal
* Middlepart can consist of quieter phrases
* Impressive finish with highlights, not with weaknesses!

2. Originality:
* Not designed like a standard test
* If possible not always trot  walk  canter
* New lines, surprising transitions
* Combinations of movements / transitions
* Not too many  isolated movements without connection to other movements
* However: No circuslike sequences

3. Use of Arena:
* Arena should be used as a whole
* There should be a balance between left lead work / right lead work
* Not too many movements shown on standard lines (track, diagonal...)
* Not the same movement shown on the same line several times
* Clearly recognizable lines
* A symmetric freestyle gives the impression of being well structured

The risk in accordance with the ability of rider and horse is the main criterion for its assessment !!!

1. Movements:
There are only three (combined) movements existing that are not part of any standard test:
&nbsp- Piaffe pirouette
&nbsp- Half pass in passage
&nbsp- Canter pirouette more than 360° (max. double, only in GP)
To be regarded as a difficulty, they have to be executed correctly (marks of 7 and better)

3. Combinations:
Combinations of movements (2, 3, or more movements) can increase the mark.
To be regarded as a difficulty, the combinations must follow each other as directly as possible.

4. Lines / Points that make the execution more / less difficult:
* Easy: All movements on the track; pirouettes on circle line;
&nbsphalf passes less steep than required in the respective standard test
* More difficult: movements on the 2nd track, quarter line, centre line;
&nbspchanges on curved lines (circle line, serpentine, through 2 corners)
&nbspoccasionally: movements that lead to the outside (towards spectators, exit ...)

5. Repetitions:
A difficult freestyle exceeds the minimum requirements (see FEI Guidelines for Degree of Difficulty, 2009)
Fundamental movements should be appropriately repeated.
Reins in one hand for a few special movements can increase the mark for harmony and for the degree of difficulty, but the technical execution must be as correct as if ridden with both hands.

1. Well fitting to all Paces and Transitions:
* The music should fit to the mechanics of the horse  a music of its own for each pace is required
* There should be a differentiation between music for trot or piaffe / passage
* (Canter) music needs structure (a clear beat emphasising the inner front leg)
* No background music like in a supermarket
* Changing pace / transitions in time with the music, not at prescribed markers
* Too many changes within the paces are difficult to realise by the music and often give the impression of a hectic performance

2. Well fitting to the Movements:
* Movements can be underlined with a significant theme
* Underlining the piaffe can only be recommended if the horse executes the piaffe very rhythmically and clearly diagonal
* Movements can be underlined but also concealed by the music
* Movements and music should never contradict themselves
* Entering the arena and the finale should be accentuated by the music. Clear finish to the test.
If you close your eyes you should be able to imagine, which movement the rider shows this very moment.

3. Well fitting to the Type of Rider/ Horse:
* A good freestyle music should not contradict the appearance of rider / type of horse. Example:
* No too melancholic music for a young pony rider
* Very heavy music can "slay" a lightfooted thoroughbred
* Music can be extraordinary  as long as it fits well

4. Style of the Music:
A good freestyle music is a musical unity
* If possible, taken from one genre: Softpop, rock, musical, film soundtracks, classical music...
* Preferably one type of orchestration
* Short sequences such as jingles, minimum vocals, sounds, etc. can give good emphasis to particular movements
* Vocals are not forbidden but should not be too dominating
A judge should never ask himself whether HE/SHE likes the music as long as it fits well to paces,transitions, movements, horse and rider.

5. Evoking positive Emotions
A good freestyle music evokes positive feelings and emotions
* The rider must sell his freestyle to the audience
* Preferable: A catchy music that stays in the heads
* The rider should not choose neither a boring, nor a too complicated or even aggressive music 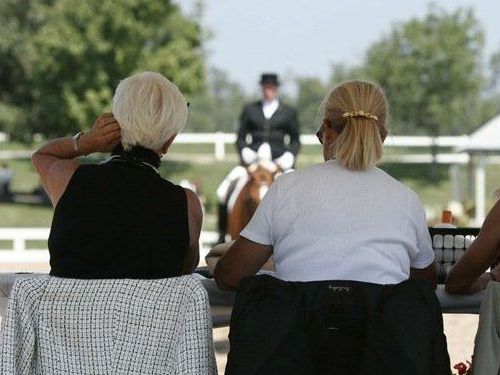 Entrance and Halt:  Focus on correctness of halt
- The rider has the freedom to choose pace and place on the centre line, direction to C
- Technical mistakes that happen before the 1st salute and in the transition have to be considered
- The move off has also to be taken into account (regarding contact, promptness...)

Walk:  Focus on quality of pace
- In both tempi min. 20 m consecutively on one track = on a straight or curved line. Not to be performed as a lateral movement. A walk pirouette may be embedded in the collected walk.

Lateral Movements:  Focus on correct rhythm, fluency, bend, collection, cadence, balance, contact
- Shoulder-in: Should be shown on clearly recognizable lines (min. 12 m); not preferable to outside
- Half Pass: The steepness is at the discretion of the rider, but should not be shallower than the requirements of the standard test (in this case slight deduction in mark for HP possible)
- Beginning and end of the lateral movements should be clearly defined
- Zig-zags in trot = always allowed; in canter PSG and higher (if shown in JUN FS: mark for each HP < 5)
- A mistake in a change after a canter HP will reduce the mark for this HP (JUN: extra mark f. change!)
- Travers/ renvers do not replace the compulsory movement half pass

Extensions:  Focus on quality of pace, true lengthening, change of frame, transitions
- Extended trot should be shown on a straight line; on circle line it is regarded only as medium trot mark < 5 if it is the only one, otherwise no mark
- Transitions and (incorrect) flying changes influence the mark for extensions (changes in JUN = extra)

Series of changes on a curved line:
- Focus on quality, balance, length of canter strides, straightness
- An unsuccessful trial has to be marked < 5

Pirouettes:  Focus on rhythm, activity, collection, balance, suppleness, number of strides, size, slight bend
- On both reins from/ to collected canter, according to the requirements of the class (1, full, max. 2x)
- A pirouette from/to halt, walk, piaffe is only counted if shown in addition to a correct pirouette
- Double pirouettes are judged as one movement, not as the average of two rotations
- Combination of pirouette left and right should have 3-4 straight strides in between to be counted
- Watch the execution of precisely shown 180° in YR/ 360° in Inter I, A, B- Freestyle

Piaffe Pirouette:
Judged as piaffe if the rider shows min. 1 x 10 steps piaffe on a straight line, otherwise < 5
A piaffe pirouette can be shown: from 90° - 360°, as a fan, or back and forth. 1 or 1 if possible - to both sides.
More than 360° in one direction should not be shown. ( Unbalanced choreography)

Correct execution:
- As for piaffe
- The horse turns around the inside hind leg, radius as small as possible
- Maintenance of same level of activity and elasticity of back and steps
- Very slight flexion/ bend to the direction of the movement required
- To be counted as a difficulty, a piaffe pirouette should be scored 7 or above!

Mistakes in piaffe pirouettes:
- Diagonals visibly breaking up, uneven steps, change of rhythm and tempo
- On forehand, loss of self-carriage/ balance, etc.
- Losing activity, falling into walk, stiffening the back, any form of resistance
- Turning around the middle, escaping quarters, stepping sideways/ backwards/ forward, too large
- Outside flexion/ no bend at all

Half-Pass in Passage:
Judged as passage if the rider shows min. 1 x 15m passage on one track, otherwise < 5. A half-pass in passage can be shown as an ordinary half-pass or as a zig-zag. It should be executed at least 5m sideways to make it recognizable. Less crossing of legs/less steepness of angle are expected.

Correct execution:
- As for passage
- Slight but uniform flexion/ bend, slightly crossing legs
- If possible a half pass in passage should be executed to both sides
- To be counted as a difficulty, a passage half pass should be scored 7 or above!

Mistakes in passage half passes:
- Loss of regularity and cadence. Lacking energy and engagement behind, getting hollow in the back
- Loss of collection, self-carriage, balance, horse getting above the bit, strong in hand...
- Loss/ change of flexion/ bend, tilted head, quarters leading
- Not crossing at all, not far enough sideways

Transitions:
- Focus on maintenance of rhythm, collection, self-carriage, fluency, straightness
- Only to be counted as passage-piaffe-passage transitions (not pi-pa-pi)
- Should be shown at least once on a straight line
- Transitions on a curved line from piaffe-pirouette to passage-half-pass are counted as transitions

Reins in one Hand:
Focus on light and steady contact
Showing a horse successfully with the reins in 1 hand is reflected in the marks for harmony (= rider) and difficulty
- Reins in 1 hand, the other hanging still and relaxed by the riders side
- Movements must be executed as correctly as if ridden with both hands
- Flexed exercises should be executed on both hands

* Mark for rhythm: Influenced by quality of paces (mainly) and impulsion.

* Mark for harmony: Influenced by execution of test incl. correct training of horse, technical mistakes and quality of riding. Strongly connected with degree of difficulty: negatively if the horse makes many mistakes and appears over asked; positively if difficulties are presented very harmoniously. See also mistakes of rider!

* Mark for choreography: Influenced by creativity, structure etc.(see above). Connected with d. of difficulty: negatively, if risk was too high, positively if difficulties are well presented on interesting lines or in original combinations. Will clearly be diminished (to 5.5 or lower) in case of showing a Freestyle not according to FEI Freestyle Directives.

* Mark for degree of difficulty: Influenced by all kinds of difficulties (see above) and their technical execution(!!). Will clearly be diminished (to 5.5 or lower) in case of showing a Freestyle not according to FEI FS Directives.

* Mark for music: Influenced by the riders choice of a well fitting music (see criteria above) but also by the execution of the movements which must always remain in accordance with the music.